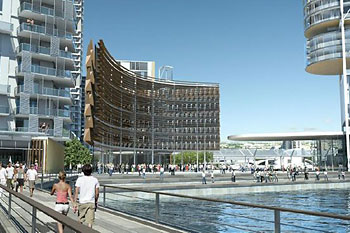 RESEARCH SHOWS homes around the $6 billion Barangaroo Harbour development have defied city-wide trends to record a 25 per cent increase in sales prices.

Apartments around the development, which includes a headland park and extension of the CBD, cost up to $15,000 per square metre.

Since the project was announced during the GFC, they have risen in value with the median price of units in Millers Point topping $1 million in the 2011 March quarter – up from $790,000 in late 2009.

In Pyrmont, where residents campaigned against the project arguing it would lead to property values falling, unit values have risen by median of $90,000.

On Kent St, where residents have been most concerned with the development’s impact, there have been more than 200 sales, with some properties snapped up after just two weeks on the market.

Of another 142 units on Kent St, Dalgety Rd and Hickson Rd, Millers Point – the area closest to the development – more than a third sold for more than $1 million.

And real-estate agents said they were expecting to see major growth over the next 10 years.

“People have been stressed about change but we are getting good price growth,” Vanguarde Estate Agents managing director Tim Breckell said.

“I see it as being a strong catalyst for growth in the next 10 years.”

Ray White Circular Quay sales executive Anthony Flood said some home-hunters feared views would be built out or they would suffer noise and dust as the site was built.

“We will not see too many sales until the plan is finalised,” he said.

“In some areas they will lose their views, in others they will get better views with gardens.

“People are sitting on their hands … but that is not limited to Millers Point – there is not a great deal on the market.”

However, Mr Breckell said the project would give the Kent St area an unprecedented growth.

“All those billions have to translate to property prices. I think it will be one of the best parts of the city to live,” he said.

The future of the site is expected to be revealed next week when the result of an independent review is released by State Planning Minister Brad Hazzard.